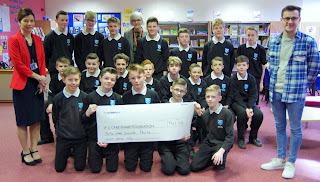 One of our Year 9 Tutor Groups decided that they wanted to raise money for a local charity, and did so by running a confectionery stall. Each learner picked a charity that meant something to them for whatever reason, and these were put into a hat for the beneficiary to be drawn.

The amount raised was £41.38, and David Brown, Fundraising and Events Manager of the charity said "the funds raised by the students will go directly to support our 'Support After Suicide Service', and their donation will provide up to ten people with packs to aid sleep and relaxation, something those bereaved often struggle with. Initially the charity was started by three young people and we are always inspired by the hard work and dedication young people are willing to put in to bring about positive change in their communities." For more information on what If U Care Share Foundation does visit their website at www.ifucareshare.com.