NEW LOOK KEPIER STARTS THE NEW TERM ON A HIGH 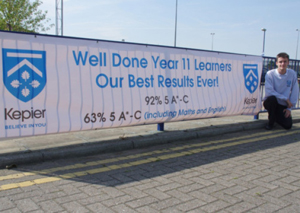 NEW LOOK KEPIER STARTS THE NEW TERM ON A HIGH

After celebrating its best ever GCSE year, a Houghton based secondary academy, is set to unveil a first class new look at the start of the new school year.

As a recently converted academy, Houghton Kepier Sports College: An Academy, has undergone an exciting transformation to produce a new identity, reflecting a return to its original name, Kepier, and drawing on the school’s heritage fused with aspirations for the future.

With learners, staff and governors taking an active role in the 12-month process and learners ultimately choosing the final design, the school’s new image will be revealed as learners return to school for the start of the new term.

Kepier's Principal, Mrs Cooper, said: “We are thrilled to welcome in the start of the new school year with our refreshed identity – this represents an exciting new chapter in the development of our school.

“Becoming an academy in August 2011was a great move forward for us and as a result of the recent change in status, we felt our name – Houghton Kepier Sports College: An Academy – did not communicate effectively who we are and where we see our school in the coming years. We are passionate about driving up standards and providing the best education possible for all our learners and our new image reflects us as a vibrant, forward-thinking and successful academy.”

Kepier has been at the heart of the Houghton community for hundreds of years and the school has explored its heritage and connections to Houghton, effectively returning to its roots in a bid to look forward to an exciting and successful future.

The new image reflects a return to the original name of the school, when it was founded in 1574, by Gilpin and Heath and known locally as ‘Kepier’, with the new badge now displaying four leaves from the legendary ‘Gilpin Thorn’ – an historic symbol of the holy hawthorn tree, which was brought to Houghton by Bernard Gilpin, known as Apostle of the North and Rector of Houghton between 1557 and 1583.

Mrs Cooper continued: “We are proud of our connections to the Houghton community –the school is affectionately known as ‘Kepier’ and was also called ‘Kepier’ when it was founded by Gilpin and Heath in 1574. We feel a return to our original name has impact, whilst continuing the local tradition and reflecting where we are as an academy.

“All that our learners have achieved this year fills me with great pride – 92 per cent of all our GCSE learners achieved five A* to C grades and 63 per cent achieved 5A*-C, including English and maths. We are celebrating our best ever year with a massive 10 per cent increase on the previous year and we look forward to a successful future.”

Jack Reay, head boy at Kepier, has enjoyed being a part of the process. Jack, a year 11 learner, said: “I’m looking forward to the start of the new term and all the exciting changes that are taking place at Kepier. My friends and I were involved in picking the final design and I love the colours and creativity of it.

“Our school is known as ‘Kepier’ to everyone in the area already and it was really interesting to find out some new things about the history of the school.”

Mrs Cooper continued: “We are striving to improve our school in line with the new Ofsted framework and our ultimate aim is to inspire each and every learner and offer them a clear identity within their school community – one that will make a real difference.

“We truly believe that returning to the original name of the school, combined with a stronger identity, is not only critical to the future success of the school, but will benefit the hundreds of learners who come here.”
Posted by Tim Bateson at 11:26