Kepier were delighted to welcome back Poppy Pattinson, who left us in the summer of 2016 after five years here, and have her present us with a signed England shirt which will be on display in our community reception area.

Poppy has also been involved in the England Ladies Elite Performance Camps from the age of 12, and has played for England at every age group from U15 to her current level of U19.
Poppy said “the highlight of my career so far was being part of the team that beat Germany in the European U17 Elite Competition in The Czech Republic, the first time an England team from that age group had defeated Germany.”

At the end of this month, Poppy will be travelling to The Algarve to represent England in The Algarve Cup against teams from Holland, Norway and The Republic of Ireland.
Rob Giles, Vice Principal at Kepier, said “we are immensely proud of Poppy and what she has achieved so far in her career. We have no doubt that she will continue to progress, and look forward to the day she becomes a full England International in the senior squad.”

Poppy is pictured presenting the signed shirt to Rob Giles. 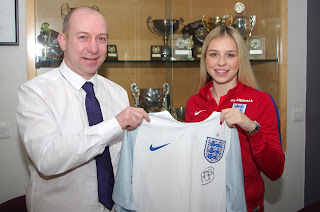