This was another inspiring win for the boys. The team played like there was no tomorrow when they took on Dyke House in the third round of The English Schools Football Association National Cup.

Kepier relentlessly drove at the opposition despite the wind and rain. Dyke House put up a good first half with the scores being level at 1-1 until after the 20 minute mark, Kepier then managed to excel and put a further four goals past the line of defence causing the scores to be 5-1 at half time.

The first half was no easy task as wind speeds caused the ball to be in the air a lot but Kepier battled hard and had most of the possession. When Dyke House got the ball Kepier put a lot of pressure on their back four, eventually breaking down their line of defence.

The second half continued with the same amount of enthusiasm and drive with Kepier getting off to a flying start, breaking lines and threading passes through to the strikers.

Although Dyke House were losing they showed some great resilience with some good spells of defending preventing the ball from breaking through their lines.

The overall score finished with an outstanding 15-1 win, with Kepier advancing into the quarter finals of the English Schools Football Association National Cup to play Harrogate. 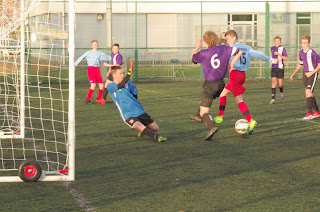