KEPIER THROUGH TO FINAL OF ESFA PLAYSTATION ELITE SCHOOLS' CUP

Kepier's U14 Elite Academy, in partnership with Improtech Soccer, hosted Thomas Telford School from Shropshire in the semi-final of The English Schools Football Association U14 Playstation Elite Schools' Cup.

Thomas Telford School had travelled up the day before and stayed in Durham prior to the game, and the match kicked off at 9.45am on our 3G pitch.

Thomas Telford began the game quickly, pinning Kepier back for the first 10 minutes or so without creating any clear cut opportunities. Having weathered the initial storm, Kepier began to take over, with some slick passing and movement creating problems for Thomas Telford. With 15 minutes gone a through ball caused confusion in the Thomas Telford defence, and Kyle latched onto the ball to fire Kepier in front.

The remainder of the first half continued in the same vein; Kepier having the majority of possession, with Thomas Telford working hard and still looking dangerous when they went forward.

The second half began with Kepier still 1-0 up. Thomas Telford again began the half quickly, pressing forward in search of an equaliser and only being held at bay by the excellent work of Kepier's back line supported by their midfield. After 12 minutes Kepier doubled their lead; Liam found space in the box and fired beyond the Thomas Telford keeper to make it 2-0.

The second goal settled Kepier's nerves, and they began to move the ball around the pitch smartly, stretching Thomas Telford and keeping hold of the ball as the second half went on. Thomas Telford continued to press at every opportunity, but struggled to find a clear cut opportunity to get themselves back into the game.

The final whistle saw Kepier maintain their two goal advantage after a thrilling and hard fought match, from which both sides come out with immense credit.

Kepier now face the winners of the other semi final between Whitgift School from Croydon and Queens' School from Watford in the final. 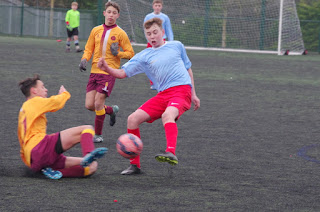