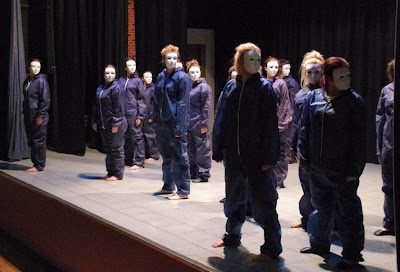 'Everybody Dance Now' was this year's title for Kepier's annual dance show…and they certainly did.  There were 58 learners involved in the show, from every year group, and they all performed in a variety of styles ranging from contemporary to break dancing.  The choreography begins in September with the organisation of the show being brought together in January.  Learners rehearse each week and even give up their Sunday for a dress rehearsal.  Many staff gives up their time to help out; Mrs Ward and Miss Bell kept the learners quiet and calm whilst waiting to perform, Mrs Parker and Mrs Large organised refreshments, and Mr Dixon and Mr Telfer did an outstanding job with the technical requirements of the show.  The learners were all fantastic and Miss Farnie, our Head of Dance within our PE Department, who puts an immense amount of her own time into getting this night arranged, was incredibly proud of them all.

The show was performed in front of an audience of 270 parents/carers and families between 7pm - 9pm on Tuesday April 16th. Those who took part received some fantastic comments about their performances.